Memoirs of a Geisha Event 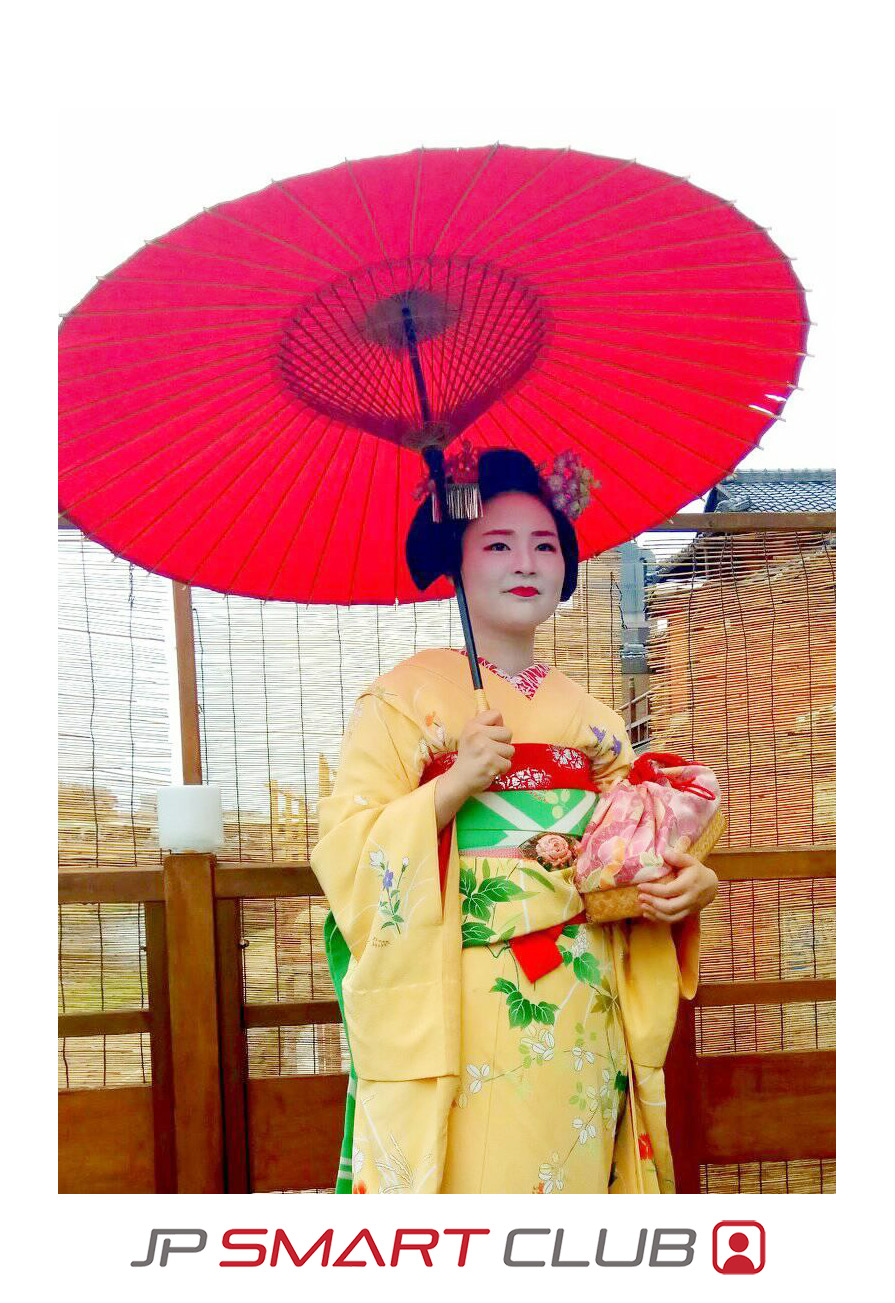 Those are the words people use to describe geisha - those elegant, masked in white make-up and impeccably dressed women in Kimono whom many can only get a glimpse of on the streets of Kyoto.

On a beautiful Saturday afternoon in September, we at JP Mobile and four JP Smart Club members together had the chance to meet an apprentice Geisha – Maiko, in real life. 4 JP Smart Club members attended this time – 1 from Korea, 1 from Indonesia, 2 from Vietnam, along with our CEO and one staff member.

At about 1 o’clock, we arrived at Sasora - a traditional-styled café, which is situated on the side of Kamogawa river. While waiting for the Geiko-san to come, we did have enough time to sit down and introduce ourselves. It was very interesting when we, hailing from different countries, were able to meet up and make friends with each other in a foreign country – Japan. There is something very sweet and heart-warming about that. 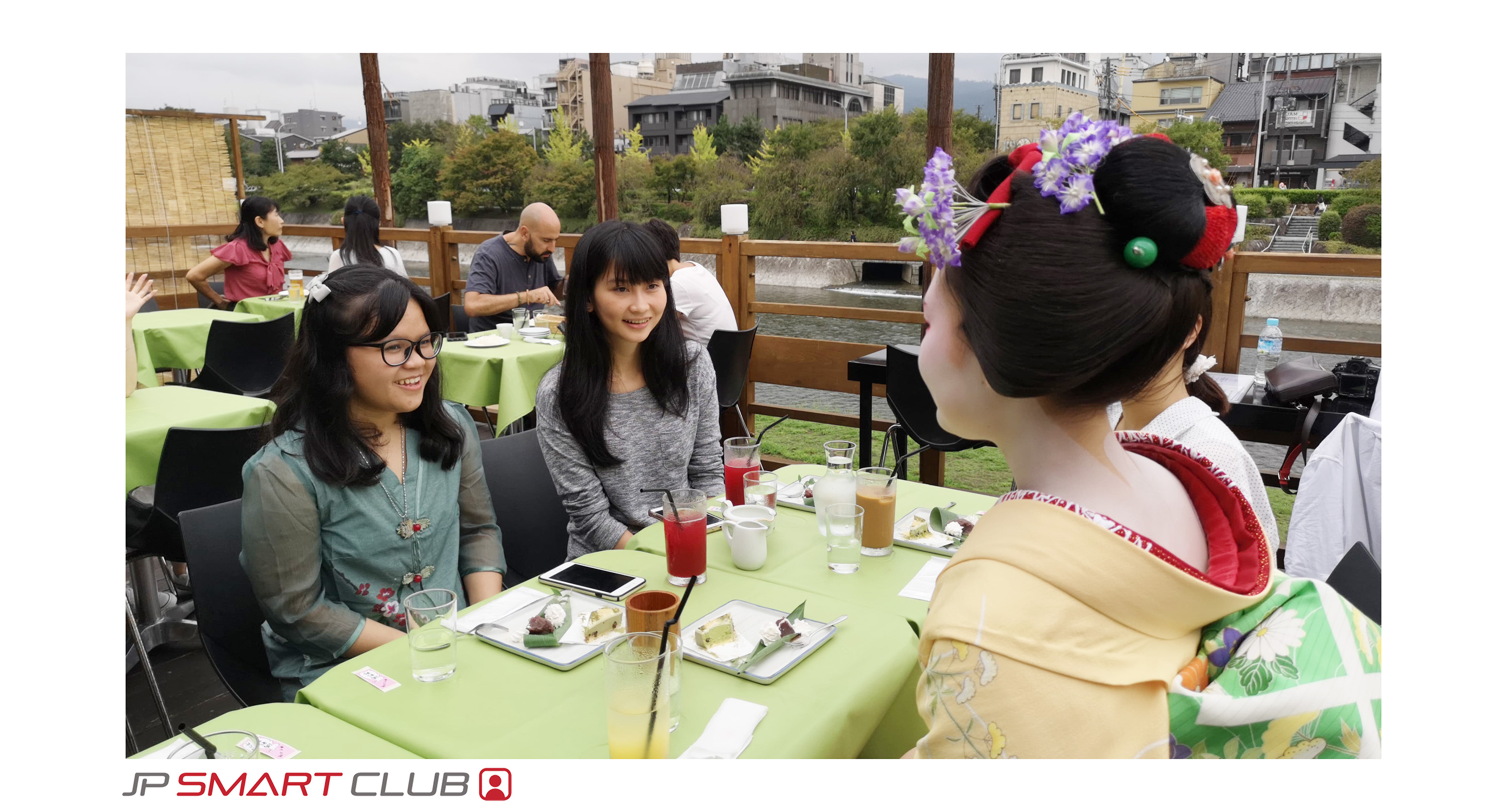 15 minutes of waiting passed by and  finally the Maiko-san arrived at the café. Dressed in a creamy yellow Kimono embroidered in elegant branches of autumn flowers,Masano-chan - the Maiko, amazed us all the moment she stepped in the café. I twas literally a moment of speechlessness, partly because of Masano-chan’s beauty, partly because of our inability to articulate the real emotions that she gave us.

Only after Masano-chan’s bowing down to greet, did we gain our consciousness and respond to her graceful way of saying hello. We let Masano-chan take the center seat so much because she was the most important person in the event and started the conversation, which amazed us no less. 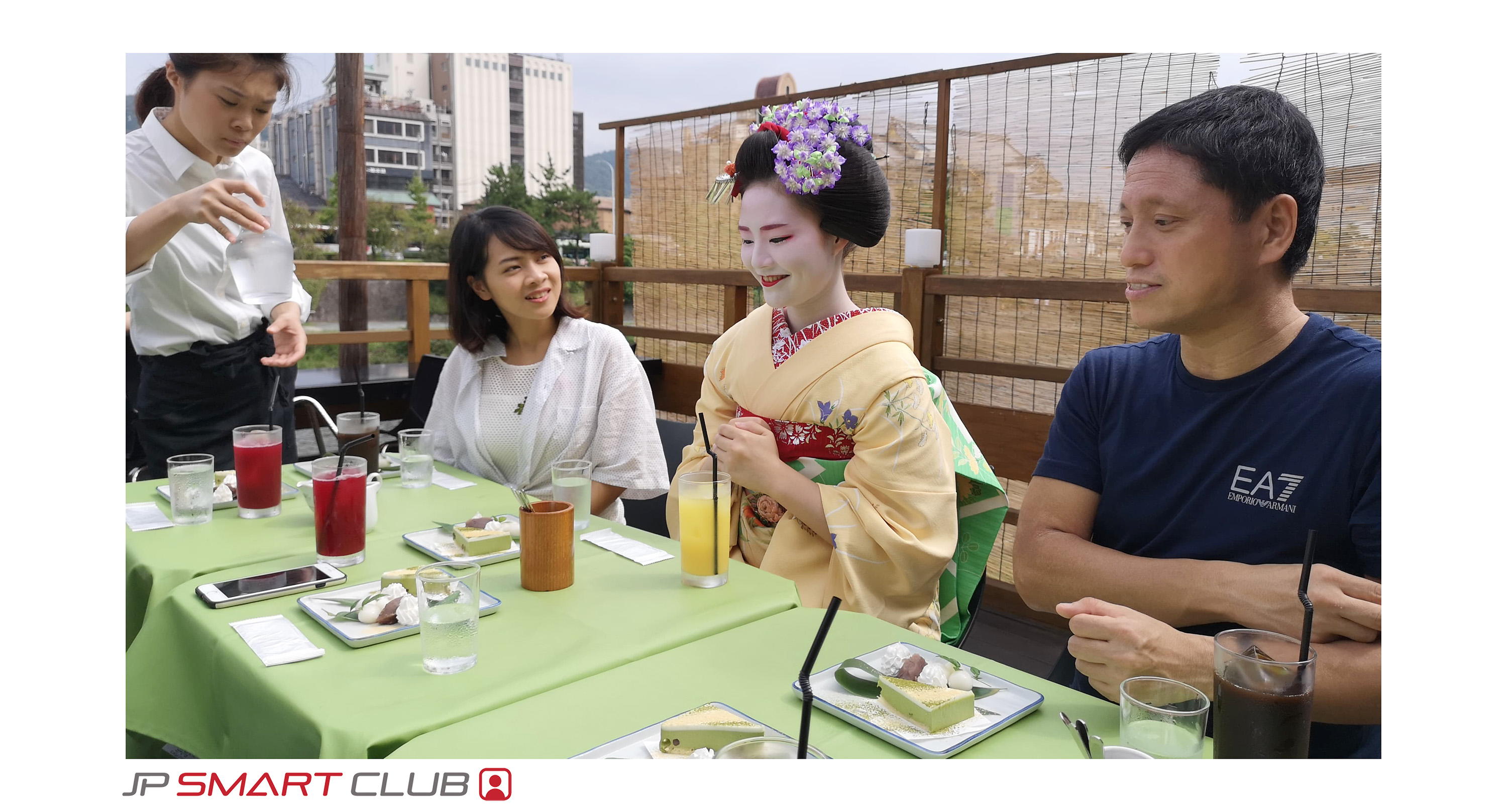 Before seeing Masano-chan, we only had a very vague idea of what life of a Geisha entails. It’s undeniable that Geisha has become hugely popular among English-speaking population after the publication of Memoirs of a Geisha - the novel. However, we all keep in mind that we should take the novel,which was written by a foreigner, with a grain of salt and better talk to a real Geisha to learn about what is happening in her life. Last time was that special occasion when we could do what we had been yearning to do for so long – see a Geisha in real life. 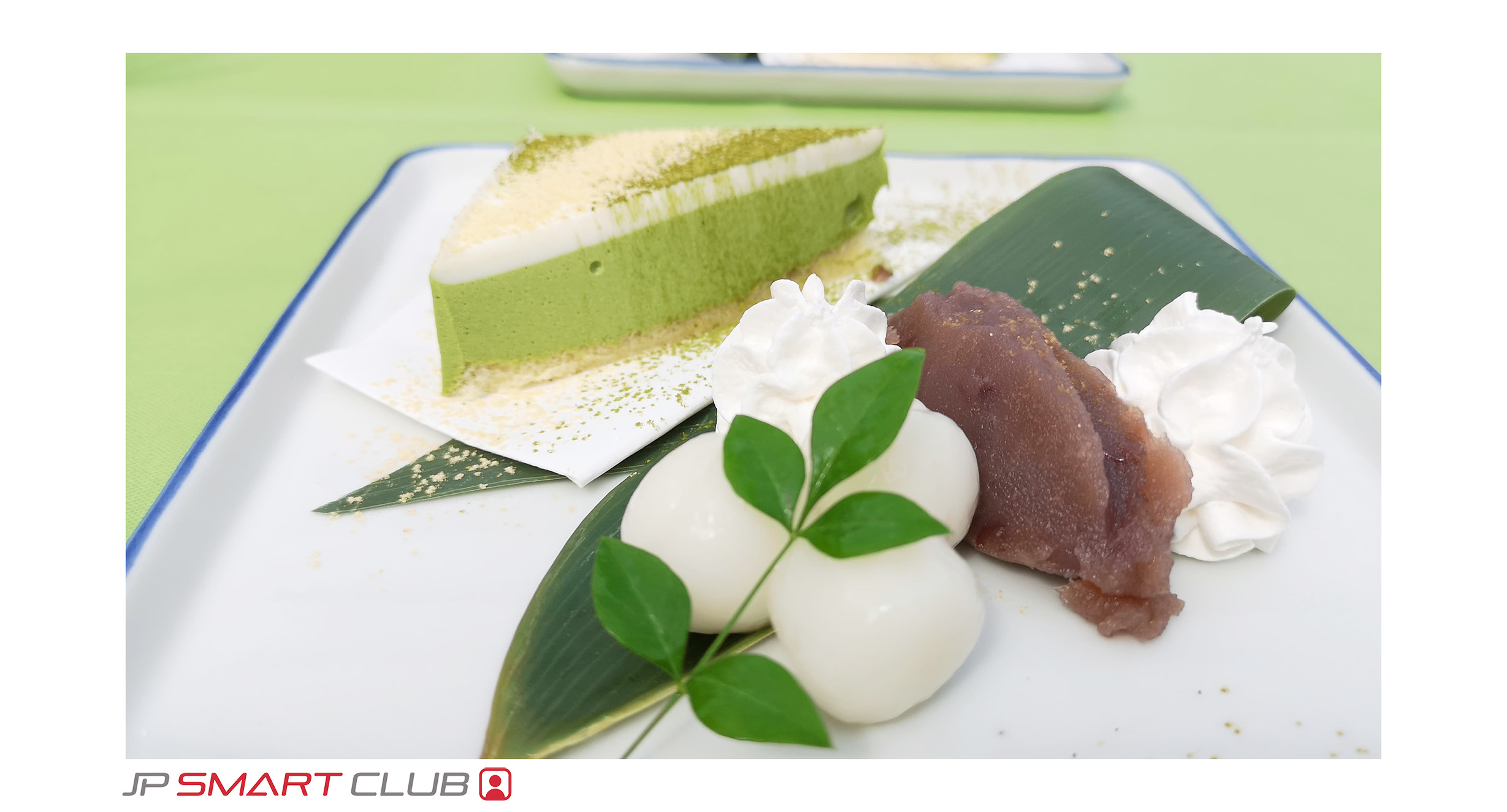 We have to admit that Masano-chan’s dressing is truly magical. It was so intricate, so much to the detailed, ornate yet not overly ostentatious. All the details looked so well-put and in harmony with one another. Masano-chan explained to us about her hair ornament, which is called kanzashi. We got to know what kanzashi is actually a seasonal accessory. Maiko-san need to change their kanzashi according to the month of the year. For example, in February, Maiko-san wear plum blossom kanzashi while in April they wear cherry blossom kanzashi. Last time was in September so Masano-chan wore a violet bellflower kanzashi, which was placed lightly over her spectacularly Japanese-styled coiffured hair. Just like that, we were enchanted by Masano-chan and her telling us on the art of being a Maiko. 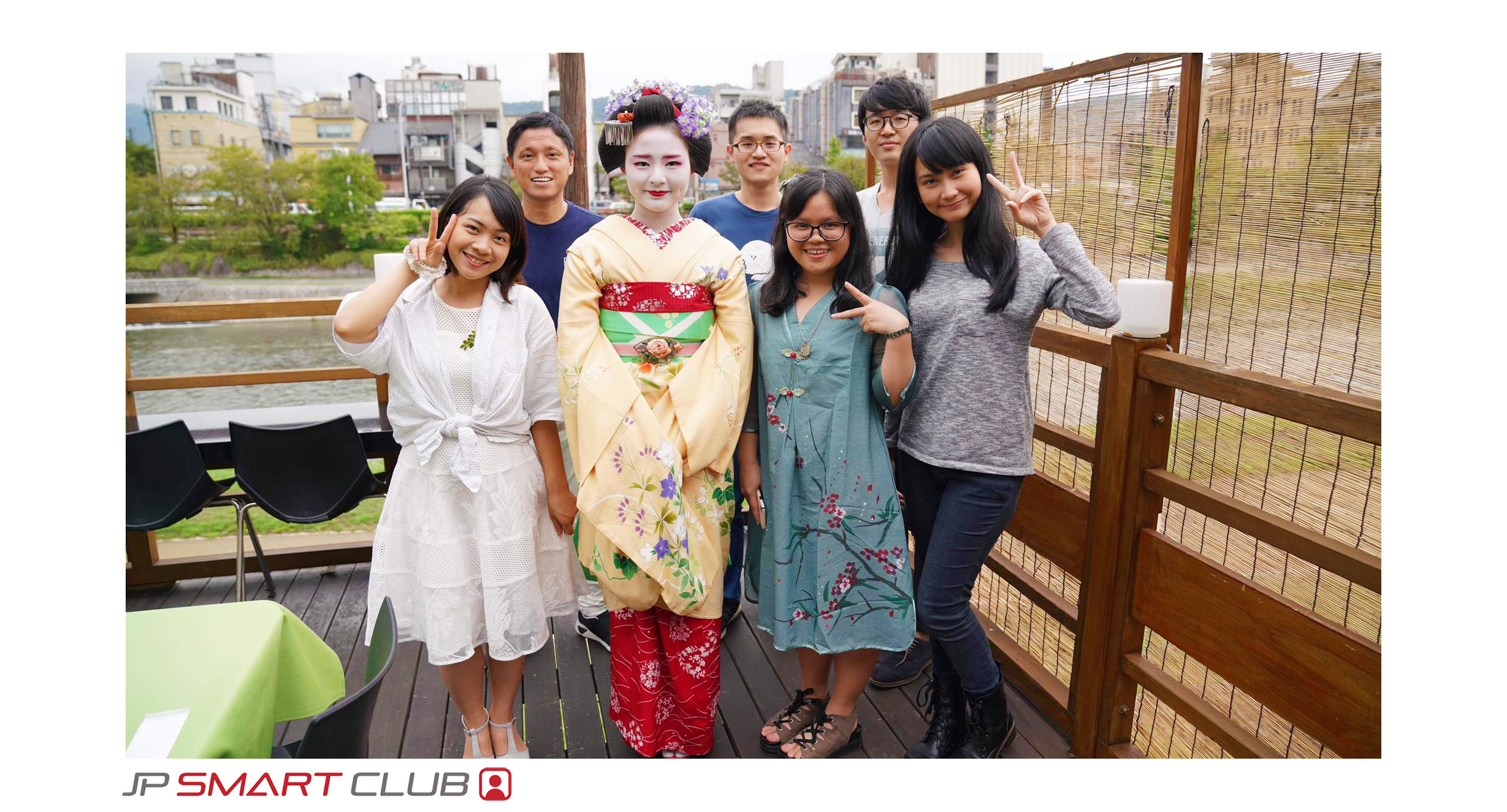 We were taken aback to know what Masano-chan is only 18years old. She made her debut (misedashi) in December 2016 when she was only 16years old. While her peers are enjoying their life by going to places,Masano-chan has to undergo very rigorous training at the tea house (ochaya)where she was admitted to. The training course to become a professional Geisha does not end overnight. It is actually a 5-year intensive training program,where Masano-chan is allowed only 2 days off a month and has to spend most of her time in the Tea House. There, she learns how to pour tea, how to speak Japanese with a Kyoto accent, how to bow gracefully, how to play traditional instruments, how to entertain guests and probably also how to mesmerize anyone who ever casts his eyes on her smile. 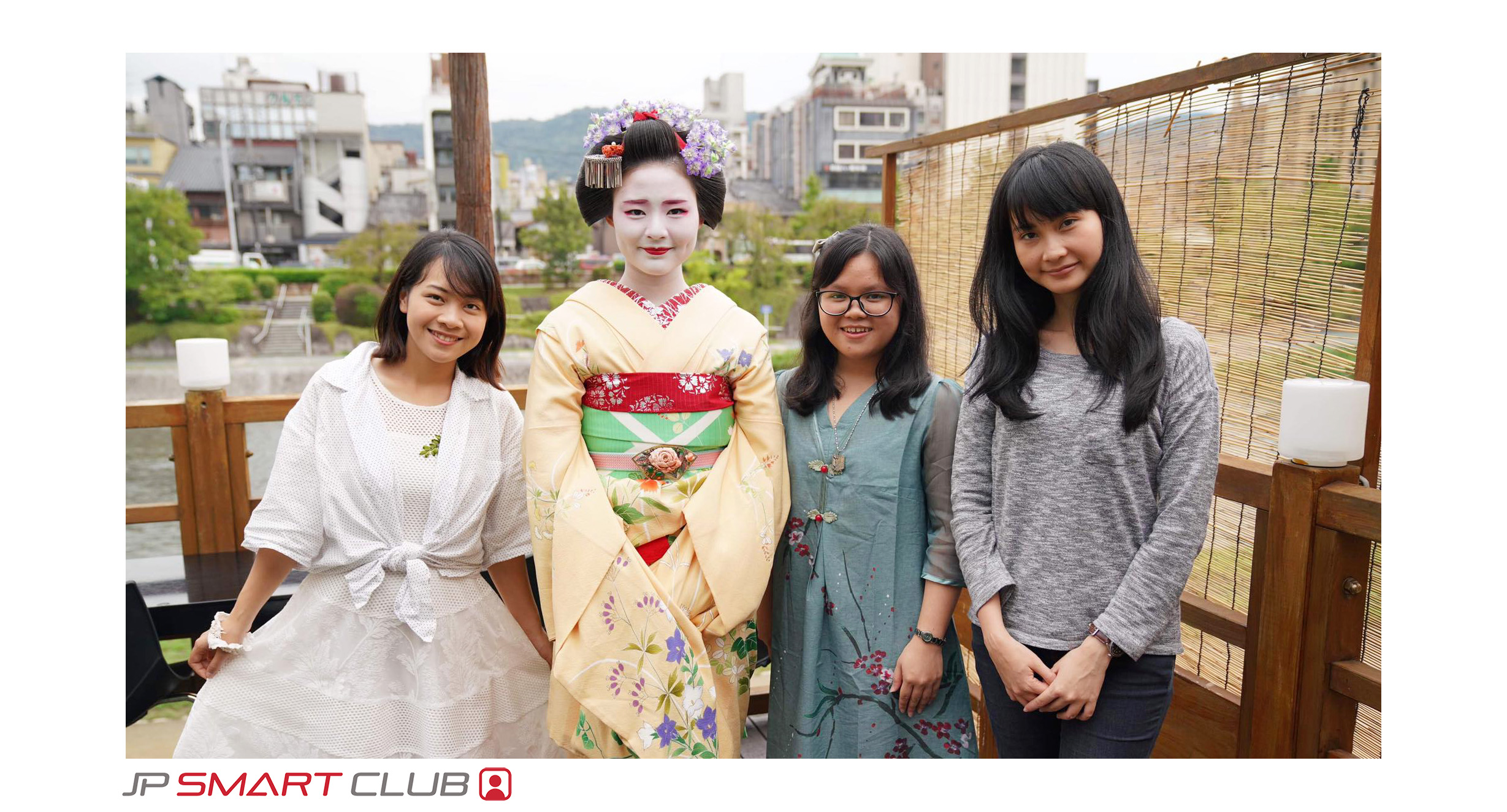 Learning about Masano-chan’s story made us respect her even more. We asked ourselves how such a young girl could have such strength to forgo the several fun things of teenager life and go for such rigorous training to become a Geisha. Her internal strength and beauty compliment each other so well,making her presence so much like that of a living piece of art.

The event was fun, educational and left in us some very hard to explain emotions. We had never been that close to a Maiko-san, let alone having the chance to talk to one. Last time was truly special for not just JP Smart Club members, but also JP Mobile staffs as well.

Thank Masano-chan and four JP Smart Club who attended our Memoirs of a Geisha Event. We hope that you guys will keep supporting JP Smart Club and together with us make JP Smart Club a place to go for foreigners in Japan! 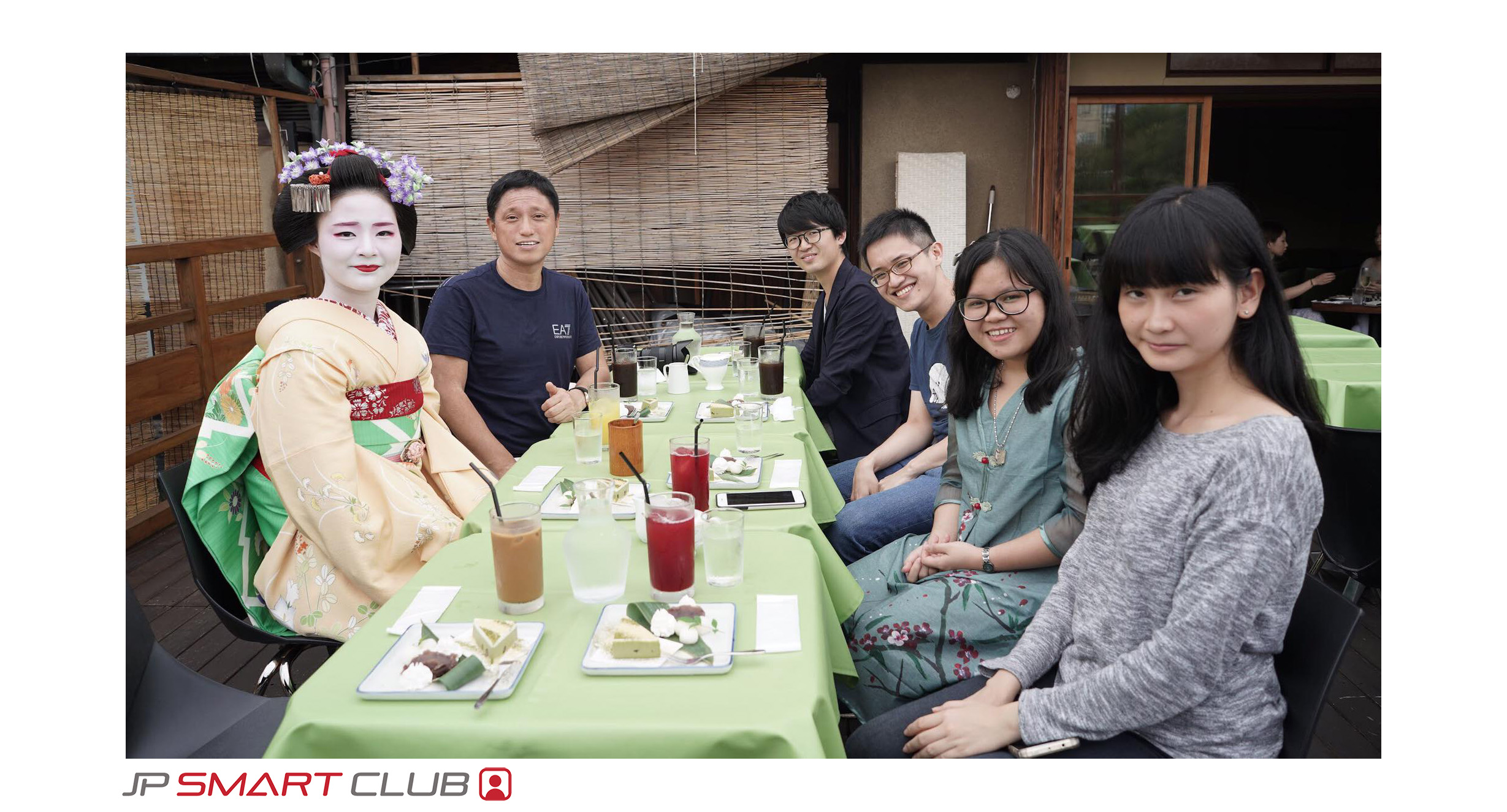